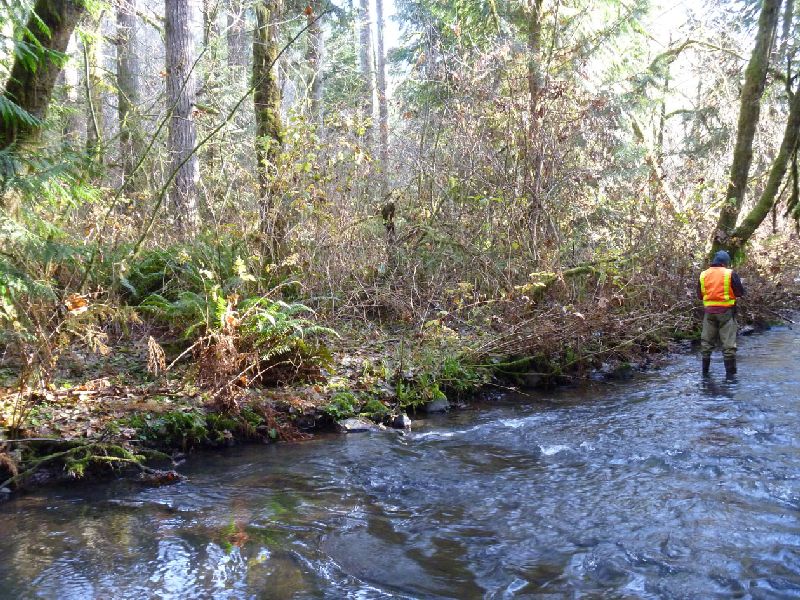 Milton Creek was identified as a high priority tributary to Scappoose Bay and the lower Columbia River Estuary. Multiple species of salmon utilize the system including coho, Chinook, and chum as well as steelhead and sea-run cutthroat trout. A rapid biological assessment, conducted in 2012 identified several reaches in the headwaters of Milton Creek as anchor habitats for coho and steelhead.

In 2013, the Scappoose Bay Watershed Council contracted with Waterways Consulting to assist in a planning process to enhance instream habitat by introducing large wood to over three miles of channel that occurred between the two segments of identified anchor habitat. The entire reach is owned and managed by the City of St. Helens who were active partners in the planning and design process and have committed to donating large wood to the project.

Following a comprehensive site assessment a total of 15 stream reaches were identified within the 3.2 mile assessment area with 7,600 feet of channel proposed for introduction of large wood. Due to poor accessibility to many of the reaches and the desire to introduce entire trees to the channel, the proposed approach consisted of felling existing, standing trees from the adjacent forested areas. Dense stands of primarily douglas fir occur on the perimeter of managed tree farms. In 2 of the 15 reaches wood was harvested from the adjacent forest an installed in jams in the channel. In the other reaches, trees were cut directly from the adjacent forest where conifer densities were high. Approximately 400 logs were placed in the three mile project area.

View the embedded image gallery online at:
https://www.watways.com/milton-creek-large-wood-enhancement-project#sigProId8ab086850c
back to top